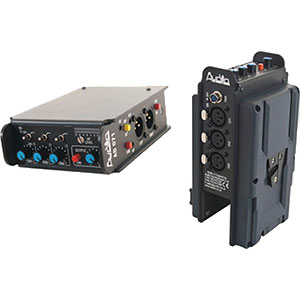 This mixer from Audio Developments has been designed for a variety of applications. However, its small size (13.5×9.5×4.0cm) and low weight (400gm), lends itself to being mounted on a camera or attached to a belt. It has 3 inputs and two outputs with limiter on microphone inputs and the main outputs. There are two configurations; a one microphone plus two line inputs or three microphone inputs. It is capable of being set and left to process the audio..

MIC INPUTS – One or three electronically balanced type with XLR connector, 48V phantom power, high-pass filter, gain control and mic or line input selection.
LINE INPUT – Instrumentation grade electronically balanced with gain/level control.
ROUTING – Each input is routed to left, right or left and right by two toggle switches.
OUTPUTS – Electronically balanced with XLR type connectors and stereo rotary level control.
Can be unbalanced without loss of level or degradation of quality. A push-button switch selects line or microphone output levels to the XLR connectors. A 3.5mm jack socket carries output signals at microphone level.
LIMITERS – Incorporated in the microphone inputs and the two main outputs. The microphone input limiter is permanently in circuit. A push-button switch introduces the output limiters into circuit and two LEDs indicate the onset of limiting.
LINE-UP OSCILLATOR – 1kHz tone injected into outputs.
MONITORING – Headphone output on 3.5mm jack socket with a push-button switch selecting the direct or return signals. The return signals are brought in on a 3.5mm stereo jack.
METERING – Two LED ladders indicate output level
POWERING – Either external power, via a 4 pin Hirose connector, or a separate PP3 9V battery pack can be used to power the mixer. An LED indicates power present and flashes when the voltage is too low.

The mixer is designed to fix a Giottos MH 621 or 631 camera mount enabling the camera to be easily removed from the mixer.

A light weight aluminium plat fixed to the under side of the mixer has a standard ¼ thread for mounting on a tripod.